MANILA, Philippines – If other countries can do it, why can’t we?

This is the cry of health advocates during the celebration of the 2013 World No Tobacco Day on Friday, May 31, in Pasig City.

Dr. Ulysses Dorotheo, director of the Southeast Asia Tobacco Control Alliance, took out a cigarette pack with plain packaging and showed the graphic health warning. It was an example of a packaging other countries such as Thailand and Australia already implement.

But in the Philippines, health warnings on cigarette packs are still in text form. For the groups, this poses a problem.

Yet a giant stride has been made: the passage of the sin tax law, which increased taxes slapped against tobacco and alcohol companies.

“But the fight is not over,” Health Justice legal consultant Atty. Diana Triviño said, referring to other measures that still make cigarette-smoking rampant among Filipinos today.

One such measure is the partial ban on tobacco advertising, promotion and sponsorship, a ruling that has been in place since 2003 through RA 9211 or the Tobacco Regulation Act.

The law prohibits mass media advertising on TV, radio, print, and outdoor billboards. Advertising and promotions can be done during actual sale, while limited sponsorship is allowed.

The groups present in the World No Tobacco Day press conference on Friday called for a total ban of tobacco advertising, promotion, and sponsorship.

DOH has actively campaigned against tobacco smoking and tobacco industry interventions in the government.

In 2010, the department even issued an order requiring graphic health warnings on cigarette packs, but the directive met a temporary restraining order from the Supreme Court after tobacco firms questioned the move.

“They say they will [lose revenue] once they make packs with [graphic health warnings]. But the truth is, they’re already doing it. They’re already manufacturing tobacco products with pictures of health effects, but they’re only exporting it to countries with rules requiring [the] pictures,” Triviño said, adding that she has seen packs in Thailand that were made in the Philippines

Dorotheo said graphic health warnings in cigarette packs are most effective in discouraging young people to start smoking. For him, the target consumers of tobacco companies are not the current smokers, but the youth.

“Based on industry documents, [their target] is the youth. [Based on] a quote from Philip Morris, they really aim for the replacement smokers,” he said. He was referring to a quote (‘Today’s teenager is tomorrow’s potential regular customer’) attributed to a 1981 document of the tobacco firm.

According to Triviño, a survey suggests that about 14% of children are smoking any form of tobacco product, while 20% try cigarette. In addition, more than one-fourth of young people are not refused cigarette purchase in retail stores. 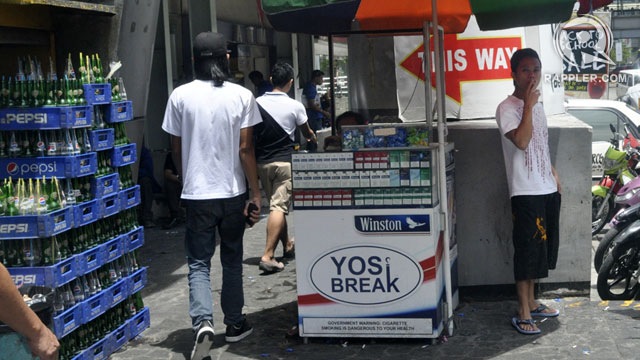 NO YOSI BREAK. Stores located 100 meters within a school zone are not allowed to sell cigarettes. Photo by Leanne Jazul/Rappler

Vendors cannot sell cigarettes within a hundred meters from schools. This rule will also be applied to tobacco advertisements.

“Retail stores that continue to sell cigarettes and allow the tobacco industry to advertise their brands may be ordered for closure,” Labao-Alzona said in Filipino.

Currently, only a few local government units (LGUs) in the country implement a total smoking advertisements ban in their areas: Davao City, Makati City, Bataan, Nueva Viscaya, and Ilo-Ilo City. No tobacco companies sued any of these LGUs.

“If some LGUs can do it, why can’t it be done in all? This is a challenge for them. If [they] really want to value the health of [their] people in [their] cities, remove tobacco advertisements. It is a way to save the health and lives of our children,” Dorotheo said.

But while national laws on tobacco-control are implemented by LGUs, tobacco firms reportedly influence their officials and negotiate against anti-smoking policies.

The country’s prevailing laws only seek to regulate and not close tobacco companies.

“The aim of restrictions is to save the lives of many Filipinos because we know that the effects of cigarette smoking are long-term,” Department of Health (DOH) Assistant Secretary Eric Tayag said in Filipino.

According to Health Justice, 240 Filipinos every day, or 10 Filipinos per hour, die due to smoking. WHO estimates that by 2030, at least 8 million people globally will die every year from tobacco-related diseases.

“The number will still go higher. So we hope that all branches of government will be with us in our effor to lay down better measures,” Triviño said. 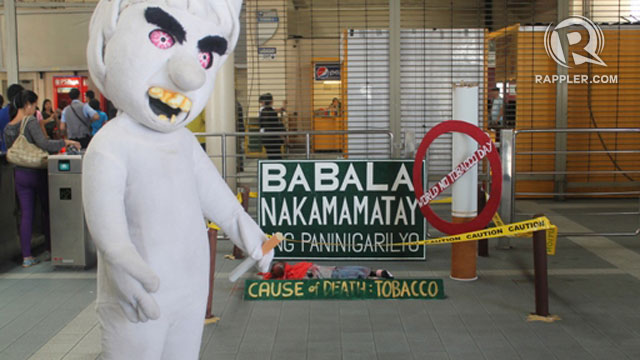 As part of the celebration of World No Tobacco Day, pseudo-crime scene installations made by fine arts students can be found in MRT stations, to emphasize the health effects of tobacco consumption and to call for better government measures of tobacco control. – Rappler.com